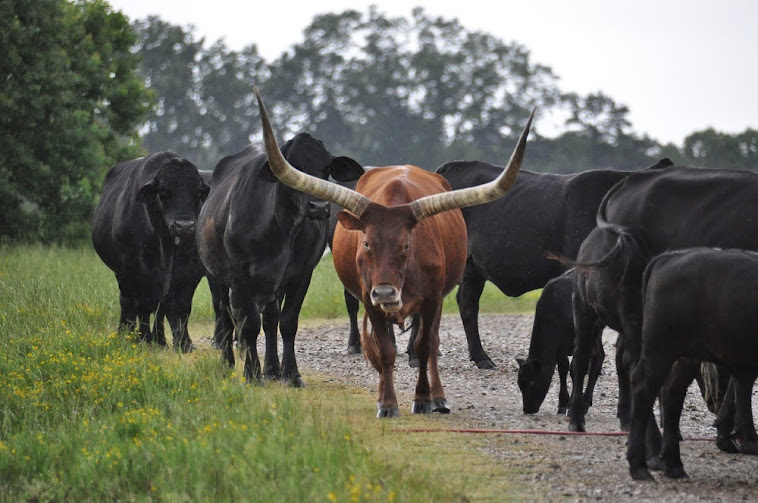 We left our Gate on Saturday, September 20th and moved to the Carthage RV Park for a few days to get some rest and cleaning on the RV done….

Sunday we decided to head over to Shreveport/Bossier City, LA

Our next to the youngest daughter, Christie, was born in Bossier City 39 years ago, and we thought we would check out the hospital where she was born while we were there, but it is no longer there…. 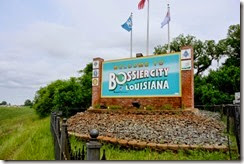 It is nice. The Casino area looked pretty small to us for as large as the building is. 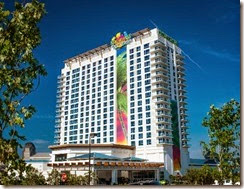 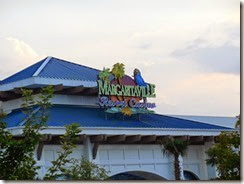 It was getting kind of late so decided to have Dinner at the Casino Buffet…boy were we surprised when they rang up our dinner and it was $49.00…that was with a Senior Discount.  I never get full benefit of a buffet because I just don’t eat enough for the price. They had lots of Seafood on the Buffet, but since Mac & I are not big seafood eaters, the other selections were limited.

We didn’t do very well in the Casino either…LOL

It was still pretty early so we decided to head over to the Sam’s Town Casino to see if our luck would change….

It did change for me as I left with more than I went in with…I think Mac broke even.

On Monday, we decided to go back to Shreveport to do a little shopping at Academy Sports and Sam’s Club. It was still early when we finished, so we decided to head back over to the Sam's Town Casino.

We ate dinner there and was not impressed at all with the food there…Most of it looked like it had been sitting for quite some time, and it should have been fresh for the dinner crowd as it was only 6pm. I understand that being a Monday, they probably weren’t real busy, but they should have kept the trays full & warm.

I guess we struck out on food while we were in Shreveport, but I came away a little heavier in the wallet from the Casino’s

On Tuesday, we just stayed around the RV getting things done so that we could head up to Lake Texoma Thousand Trails on Wednesday.

I suggested we drive over to Marshall, TX to Bar B Q Express for dinner. The reviews were really good and it had been a while since we have had good BBQ. Man are we glad we did!

This restaurant is pretty small, kind of off the beaten path, but WOW…it was awesome! 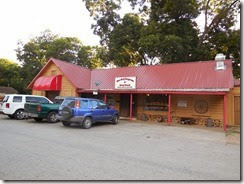 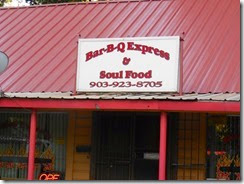 Herbert White is the Owner & Pitmaster.

His granddaughter was also working…

We decided on the 2 Meat Plate with Ribs & Brisket. I had homemade Potato Salad & Beans…yummy. Mac had the Baked Beans & some other Beans..not sure what they were.

Probably the best BBQ we’ve had in a long time. We were so hungry that we forgot to take any photos of the food…

So if you are ever in the Marshall, TX area make sure you stop by and have lunch or dinner at Bar B Q Express, and tell Herbert that you read about it in our blog!!

Wednesday morning we were up and on the road heading for Lake Texoma Thousand Trails for a few days. It was a very normal travel day and we were all checked in and set up by mid afternoon.

While here at Lake Texoma, we have been over to Sherman, TX  for some shopping, and yesterday, Tuesday, the 30th we went over to Gainesville to the Kitchen Outlet, and then to the Winstar for dinner at NYC Burgers & Dogs.

We decided while we were there to make a small donation in the Casino. The Winstar is listed as the Biggest Casino in the world. I can understand this because you can walk, and walk forever.

We played a few slot machines and I came away with more than I went in with…I call that a good day.

We have plans on Friday to meet our Son-in-Law, Dusty, his parents, Terry & Carol, and his aunt & uncle for dinner at the Choctaw Casino in Durant, OK. We haven’t seen any of them in a few months and it will be nice to catch up. Our daughter could not make the trip, so we will really miss getting to see her.

On Sunday, we will start our trip north to Enid, OK for an overnight stay. My sister Lyvonne and hopefully her husband, Carlson, are going to meet us for dinner in Enid.

Monday, we will hook up and head on up to Kingman, KS to take care of some doctor appointments, see Teri & family, and put some things in storage.

Thanks for stopping by….

Nice and informative article. This article helps me. Keep doing this.

HOW I GOT CURED FROM ALZIEMEIR DISEASE

I was diagnosed with (AlziemeirALZIEMEIR Disease) for the past 2years which made me lose my job and my relationship with my Fiance after he discovered that I was having Alziemeir disease, she left me and I tried all my best to make her stays, but she neglected me until a friend of mine from UK told me Great healer, who will restore my life back with his powerful healing herbal medicine. Then he sent me his email address to contact him- drimolaherbalmademedicine@gmail.com. And i quickly contacted him, and he said my condition will be solved within weeks, that he will treat the disease immediately only if I can accept trust on him and accept his terms and condition, I Agreed because I was so much in need of help by all means, so I did all he instructed me to do. And surprisingly after two weeks, He sent me a text, that I should hurry up to the hospital for a checkup, which i truly did, I confirm from my doctor that I am now ( Alziemeir Negative) my heart filled with joy, because truly the disease deprived me of many things from my life, This is a Miracle, dr imoloa also uses his powerful herbal medicine to cure the following diseases: lupus disease, mouth ulcer, mouth cancer, body pain, fever, hepatitis A.B.C., syphilis, diarrhea, HIV/AIDS, Huntington's Disease, back acne, Chronic renal failure, addison disease, Chronic Pain, Crohn's Disease, Cystic Fibrosis, Fibromyalgia, Inflammatory Bowel Disease, fungal nail disease, Lyme Disease, Celia disease, Lymphoma, Major Depression, Malignant Melanoma, Mania, Melorheostosis, Meniere's Disease, Mucopolysaccharidosis , Multiple Sclerosis, Muscular Dystrophy, Rheumatoid Arthritis, Alzheimer's Disease, parkison disease, vaginal cancer, epilepsy, Anxiety Disorders, Autoimmune Disease, Back Pain, Back Sprain, Bipolar Disorder, Brain Tumour, Malignant, Bruxism, Bulimia, Cervical Disk Disease, cardiovascular disease, Neoplasms, chronic respiratory disease, mental and behavioural disorder, Cystic Fibrosis, Hypertension, Diabetes, asthma, Inflammatory autoimmune-mediated arthritis. Chronic kidney disease, inflammatory joint disease, impotence, feta alcohol spectrum, Dysthymic Disorder, Eczema, tuberculosis, Chronic Fatigue Syndrome, constipation, inflammatory bowel disease, bone cancer, lung cancer. contact him on email- drimolaherbalmademedicine@gmail.com. And also on whatssap- +2347081986098. / Website- http/wwwdrimolaherbalmademedicine.wordpress.com

Another Day in Paradise

Our View of Life

“Life is not a journey to the grave with the intention of arriving safely in a pretty & well preserved body, But rather to Skid in Broadside, completely used up, totally worn out, and Screaming...... " WOW! What a Ride !!”

Mac and Netters
Wherever we are Parked, United States

Followers of our Blog